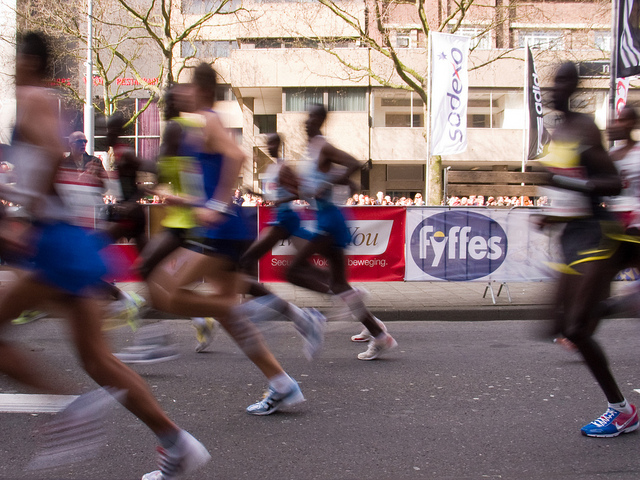 This weekend, I got to participate in the largest half marathon in the United States: the OneAmerica 500 Festival Mini-Marathon in Indianapolis.

It was my first half marathon, and I was pretty excited. I met my goal, to run it in less than two hours, by finishing in 1:57:46. (That was a small miracle considering I fought a nasty flu bug Thursday night.)

I really didn’t know what to expect, except that people said that it was quite a spectacle and a unique experience.

When I got there, I started to see what they were talking about. There were thousands of spectators. Bands. Cheer squads. Performers. Costumes. There wasn’t a dull moment the whole time.

As I ran (I obviously had lots of time to think), I decided something.

As teachers, we should be like these spectators at this half marathon. Especially at the end of the school year.

Many of them came out to support the 35,000 runners even though they only knew a handful of participants.

One held a megaphone and cheered runners on, shouting encouragement.

We should be those encouragers. We should seek out great accomplishments, large and small, and praise the heck out of them.

A completely finished assignment turned in on time. A spectacular project with stunning details and accurate facts.

Some spectators dressed up in costumes. There was a whole group of “Wizard of Oz” characters and a woman dressed as a form of the grim reaper.

We should be those encouragers, too. We don’t have to dress in costumes, but we might for special occasions.

Get dressed up and go to prom with students.

Some spectators danced and performed. An ethnic group did traditional dance as runners sped past. There were acoustic guitarists. Rock bands. Country singers.

We use our talents every day to teach, but we have other talents that can encourage our students. My wife can still do some impressive gymnastics stunts, and she breaks those out from time to time to motivate and entertain her students.

Give our students our best.

When I finished the race, I thought of all the motivators that gave me encouragement. Most of them never realized they touched home to my heart. They might have seen my wry smile as I passed their cleverly worded sign, but probably not.

Because I was focusing on putting one foot in front of the other, I wasn’t capable of giving them the thanks they deserved.

Even if the physical evidence isn’t there, be encouraged. You’re making a difference.

Students will quote your words of praise years after leaving your classroom, and you won’t even know it.

So, as the school year closes, I’m encouraging all of us – myself included – to keep the encouragement coming.

Hold up those signs.

Go out of your way to praise.

Give them our best.