Students face an uncertain future, and it’s up to educators to help them get ready. A new study sheds some light on what we can do. (Flickr / Alessandro Lucla)

We have no idea what the future holds for today’s students. We don’t know what their workforce will look like.

As educators, it’s still our job to prepare them for that future. Now, we have a little more guidance.

The Economist Intelligence Unit conducted surveys, asking students to teachers to senior business executives about how to prepare children for the future. They created a study called “Driving the skills agenda: Preparing students for the future.”

The full results of the study will be available during the kickoff presentation of Google for Education’s Education on Air, a free online conference for educators on Friday, May 7, 2015. That presentation starts at 10 a.m. EDT and features a panel of teachers, a student, a government education official and an Economist representative.

(Note: Free registration is available here until the conference starts.)

Among the findings that they’ll present:

85 percent of teachers report that advances in information technology are changing the way that they teach.

Teachers integrating technology into their classrooms aren’t the early adopters anymore. It’s hit mainstream. Technology has changed virtually everything I do, from preparing lessons to presenting material to engaging students in content. It has also changed my approach from a “present it to students” approach to giving them more control over their learning.

The big problem, though, is that many in education are trying to plug technology into what they’ve done for years. It’s like trying to pop an old cassette tape into an mp3 player to listen to music. New technology requires us to rethink how we do education to take full advantage. 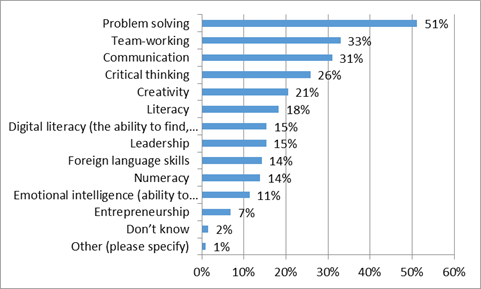 The top three most critical skills for employees today are problem solving, team-working and communication.

There appears to be a disconnect between the way schools are organized and what business wants from students when they graduate. We’re so focused on filling their brains with content when business is telling us, “Don’t worry … we’ll take care of that. We want good people who can work with out content and each other.”

In his TED Talk called “Changing Education Paradigms,” Sir Ken Robinson says it best: “[Students] have spent ten years at school being told that there is one answer – it’s at the back…and don’t look, and don’t copy, because that’s cheating. I mean, outside schools, that’s called collaboration.”

Lack of time in a strictly regulated curriculum is the biggest barrier to teaching 21st century skills.

As a first-year teacher, I was consumed with planning and grading and developing curriculum and attending meetings. I felt like I was stuck at sea, treading water just so I could keep my face above the surface to survive. Though it has improved some, I still feel very much like that as a teacher.

That’s not an atmosphere that produces excellence. I know that all jobs have their struggles. But if our goal is to create an education that prepares students for tomorrow, that’s not going to happen if I’m focused on survival.

Maslow’s hierarchy of needs puts security of body, employment, resources, etc. second from the bottom. If teachers feel like they’re fighting for their lives every day, it makes the kind of innovation our kids need today virtually impossible.

So, what do we do in light of all of this? I’ve asked myself that a lot recently, and I’m not sure. I know it won’t be cured with a silver bullet. The inaction that helplessness creates won’t fix education. I don’t have all the answers, but I believe that we can create a solution if we work together. That appears to be what this session of the Education on Air conference is all about.

So, to start, I’m going to engage in this global discussion about the future of education. Except I probably won’t be watching live … I’ll have a class when this session happens. But, like many educators, that won’t stop me from doing what I can do (watching it later and discussing it) and trying to push education forward.