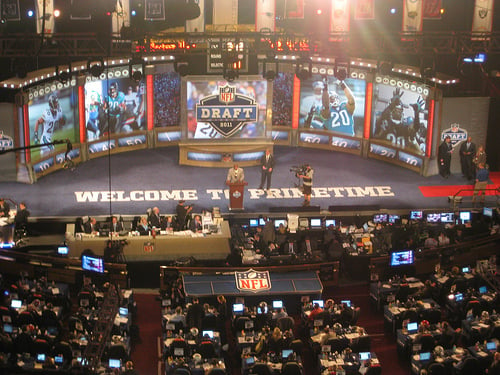 The NFL Draft attracts lots of media hype. What if our top students got that attention for academics? (Flickr / mjpeacecorps)

After being immersed in the NFL regular season for six weeks, I’ve been thinking: What if there was as much emphasis put on students coming out of college to the real world as there is with football players entering the NFL? It made me wonder …

“Welcome, ladies and gentlemen, to the 2014 Workforce Draft. I’m your host, Esteban Morales, and we’ve got eight hours of non-stop coverage as our best and brightest minds are selected for the top jobs in the United States.

We’re about to get underway with the first pick in the draft. Our Workforce Draft day coverage is brought to you today by Microsoft, Verizon Wireless, Pepsi, Ford and a slew of other sponsors. Honestly, folks, as popular as this event is, the advertisers just fight tooth and nail over these slots.

Coca-Cola has the first pick in this year’s Workforce Draft and several representatives are here at Radio City Music Hall in New York to welcome their selection. Coca-Cola is already a great force in connecting with its customers, but I wouldn’t be surprised to see it take Rosie Stephenson, a marketing major out of University of Southern California with this pick. She’s really the envy of every corporation in this draft.

To a throng of boos and hisses, here comes Arne Duncan, U.S. Secretary of Education, to announce the first pick.”

Morales: “Wow, that’s a shocker! Coca-Cola has been consistent with its Coke recipe for such a long time. Using the first pick for a chemical engineering major is a real statement pick.

But you can’t go wrong with Stambaugh. His internships are solid. His senior project – creating an environmentally healthy all-purpose house cleaner – was actually purchased by S.C. Johnson after Stambaugh graduated.

He’s a once-in-a-generation chemical engineer, so I wonder what big plans Coca-Cola has for him.

In the studio today, we have Rocko Tribiani, our analyst and Senior Workforce Insider. Rocko, what do you make of this pick?”

There’s so much talent coming out of universities right now. It’s hard to make a bad pick, especially with the first selection in the draft.”

Morales: “Right you are, Rocko. What an exciting day this has already been! If you’re just tuning in, Coca-Cola selected a chemical engineering major with the first pick in the Workforce Draft! I’ll bet they’re ready to invest in a new flavor of Coke, and Jim Stambaugh will lead them there!

It’s no wonder that this is the second highest-rated televised event behind the Super Bowl. This is great stuff! We’ll be right back after a word from our sponsors.”

What are your thoughts about the Workforce Draft? What details would you add or change to what you just read? Leave a comment below!

Are your students renters or owners?

Ditch the “lone wolf” mentality, run with the pack