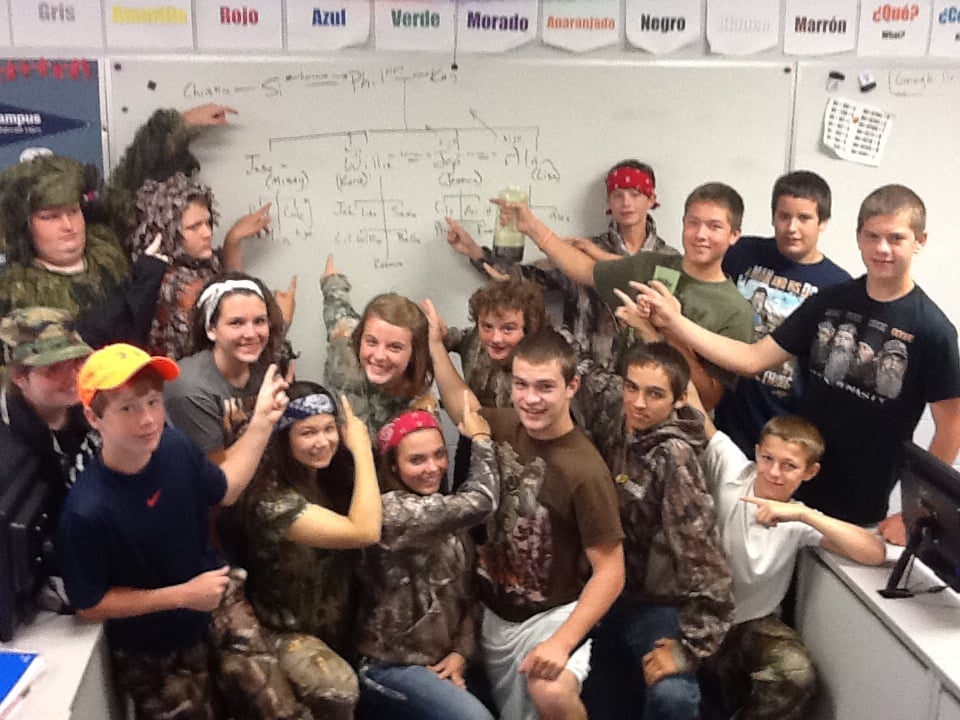 After a retweet from Duck Dynasty’s Jase Robertson, the kids at my school were pretty pumped. What, exactly, does that mean educationally? Well, a lot.

I’ve been pretty slow to incorporate social media in my classroom.

This week, however, may be the kick-start I need to jump in.

This is the week of the homecoming football game at my school in west-central Indiana. Part of the festivities are spirit days, where everyone dresses up according to certain themes.

Tuesday was “Duck Dynasty Day.” The A&E reality show about the Robertson family and their hijinx in their duck call business is a huge hit at my school, where hunting is a very popular pastime.

The students really went over the top to dress up in camouflage, Duck Dynasty t-shirts and beards for this one. One student even brought his official Si Robertson iced tea glass and pitcher.

It’s just starting to get interesting.

I said, “We should put this on Twitter and tag some of the guys on Duck Dynasty to see if we can get retweeted.” (Retweeting, if you’re not familiar, is where someone on Twitter sees your post and shares it — “retweets it” — to his/her Twitter followers.)

So we did. We took a picture on my iPad and many students’ phones, and I told the students with Twitter accounts to tweet the picture at a couple people from the show. If our Twitter blitz caught their attention, they might retweet us.

I started it, tweeting at Duck Dynasty CEO Willie Robertson and his brother Jase Robertson.

Within five minutes, Jase apparently saw the tweet, thought it was neat and retweeted our photo to his 1.2 million Twitter followers.

The kids went nuts. They were excited about their day of Twitter fame. They knew that this guy they watched and loved from Duck Dynasty had seen a picture of them, liked it and shared it with his fans.

Word spread very quickly, as it tends to do in high school hallways. The kids shared it on their own Twitter accounts. The school’s Facebook page posted the picture and the story to families and the community.

So, a celebrity retweeted a picture of my students. What, exactly, does this have to do with education?

For one, it was affirmation of their studies in Spanish. They worked in class to learn some new vocabulary, and if they hadn’t, none of this would have happened.

It was proof that good things happen if you give something your all, as these students did by getting decked out in Duck Dynasty garb.

It showed us how powerful social media can be and how real connections can be made through it. It definitely showed me the potential for using it with my classes in the future.

I’m obviously hooked on social media myself, but this may have pushed me to a new level. I’m already planning an ongoing activity where my Spanish students can connect with a friend from Mexico City to ask her questions about life there and get to know her.

Have you had any social media victories recently? Any e-learning victories? Share them with us in a comment below!

Teaching in students’ digital worlds or the world of Academia

New place for new ideas: What I like about Sanderling