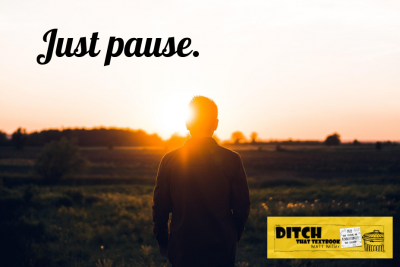 If you feel like your nonstop words aren’t sinking in, maybe it’s time to just pause. The results may surprise you. (Public domain photo via Unsplash.com)

I was a mess as a soccer coach.

I hadn’t played soccer myself since middle school. (Of course, in a small community where few people know much about soccer, you still get asked to coach!) But that wasn’t the issue.

During one practice, I noticed something. My mouth was running constantly. I started paying attention to what I was saying and how often I said it.

“Dribble with the inside of your foot!”

“Hey, come back over here to practice!”

It was even worse at the game that weekend. I realized it was part nerves (and it was only an under-8 soccer team!), part habit. I had gotten used to constantly, constantly talking.

At some point after the game was over and I had caught my breath from all the talking, something dawned on me:

The kids didn’t seem to listen to most of what I said. I was doing all of this talking, and nothing was getting accomplished.

After a while, I think my voice was like a droning hum in the background while the kids practiced and played in the games.

I see the droning hum when I look at my teaching life and my parenting life, too. So I started trying something different.

The “just pause” command, I’ve found, works best when kids (and adults, too, for that matter) know what they’re supposed to do. It’s the more polite version of “shut up and let them do their job.”

Let’s say my family’s getting ready for school in the morning. Depending on the day, it can be a hectic pace to make sandwiches, get French toast sticks gobbled down, make sure three sets of teeth are brushed, shoes are tied and backpacks are in place as everyone heads out to school.

I see my daughter, Hallie, get her shoes tied. She starts to gather her things to go out the door, but she pauses.

My gut instinct is to tell her where her backpack is, where her papers and folders are and remind her to get it all done quickly because the bus is coming.

But I just pause. I let her think. Because figuring something out on your own is way more rewarding — and way less frustrating — than being told what to do.

In that very brief moment of pause, she remembers where her backpack is and takes off to get her things arranged.

If she knew the answer, then why in the world was my gut instinct to give her explicit instructions and tell her to hurry up?

Because I’m a fixer by nature, and I’ve come to find that lots of educators have a fixer inside of them, too.

The fixer makes sure that everything runs smoothly. That all of the boxes are filled in correctly. That the backpack is found and filled in the least time possible.

The fixer makes things happen. But the fixer doesn’t always make for independent kids. (Or adults, for that matter.)

There are lots of times when our students need some quick, firm directions so they can take action.

But many times, if we hold back the inner fixer, things get done anyway. And independently.

I can hear my inner monologue …

“Matt, just pause and let the kids give you the explanation. They don’t need to hear yours if they know it.”

“Matt, just pause and let Cassie shoot the basketball. Maybe she’ll work out that kink in her shot if you’ll let her.”

The next week at soccer practice, I caught myself slipping into “nonstop talking mode” again.

I stopped. I told my soccer kiddos what they needed to do. Then, I just paused.

It was like my words had this commanding force that they didn’t before. I would say something after a period of silence, and suddenly the kids noticed.

(Well, most of them. The “come back to practice” kid never really heard anything I said, but that’s OK.)