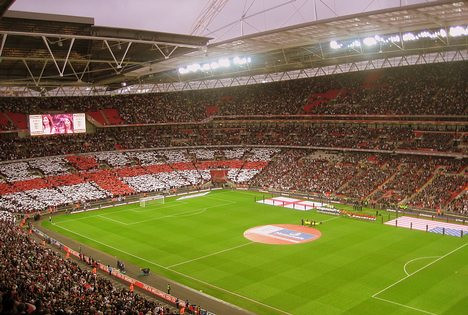 Imagine, for a moment, that you’re standing in the middle of the biggest stadium you can imagine. (I’m thinking of Wembley Stadium in London, which seats 90,000 people.)

You’re getting ready to give a five-minute presentation on a topic with which you’re fairly comfortable.
But there’s a catch.

All of those thousands of people listening and watching have smartphones. And they have the capability to send text messages to the enormous video screen in the stadium if you make a mistake to correct you.
Makes me sweat a little just thinking about it.
But what if you were the information receiver instead of the information giver? There’s a pretty good chance – although not 100 percent – chance that an “expert” and thousands of amateur editors could get the facts straight, right?
Welcome to the world of Wikipedia, bane of many a teacher’s existence, salvation of many lazy students with research papers to do.
Countless educators have told their classes, “Wikipedia does NOT count as reliable research!” And, to some degree, they’re right.
But should we just drop it from consideration entirely?
Here’s your one-paragraph background on Wikipedia: it’s an open-source article database, meaning that users can add, delete and modify its content. Its array of topics is vast, and its contributors (called “Wikipedians”) number more than 16 million (in number of registered named accounts).
It’s the open-source part that many educators take issue with. If anyone – an expert in the field or some guy who wants to pull a prank – can modify the articles, how can they be reliable?
The short answer is that Wikipedia’s articles aren’t guaranteed to be reliable. But they come pretty close, according to some research.
The main study cited in the Wikipedia reliability argument was published in 2005 by a journal called Nature. Nature submitted articles from Wikipedia and Encyclopaedia Britannica — considered a more traditional, reliable source — for experts in those articles’ fields to review for accuracy.

The experts reviewed and returned 42 articles, and the results were interesting. Eight of the articles total from both sources had what were called “serious errors” — four from Wikipedia and four from Britannica.

Wikipedia’s founder told CNET he was “very pleased” with the results, while Britannica’s president claimed that the study showed that Wikipedia was a third more inaccurate. Again, it depends on your point of view.

As an educator, these findings tell me a few things.

One, we shouldn’t rule Wikipedia out as a resource for conducting research. Again, think back to the speech in the stadium. With so many observers watching — even more now than when that study was done in 2005 — the chances of accuracy are pretty good. Sure, they’re not perfect, but even trusted information sources make mistakes.

Two, that still seems like a lot of errors to me. And if Britannica — a source I’ve trusted for years — can’t be any more accurate than that, we had better verify with multiple sources. There’s a rule in the newspaper business: always verify your facts, even if your mother said it. We need to teach our students to find truth online, not just find the first “fact” that they can.

Which begs the question, “How do we do that?”

The website for the “Dummies” how-to books offers some tips that go beyond “just dig until you’re sure.”

So just because it comes from Wikipedia, that doesn’t mean it’s likely to be inaccurate. We can’t make those kinds of assumptions anymore.

But it does mean that we should verify our information before we announce it to thousands at Wembley Stadium.