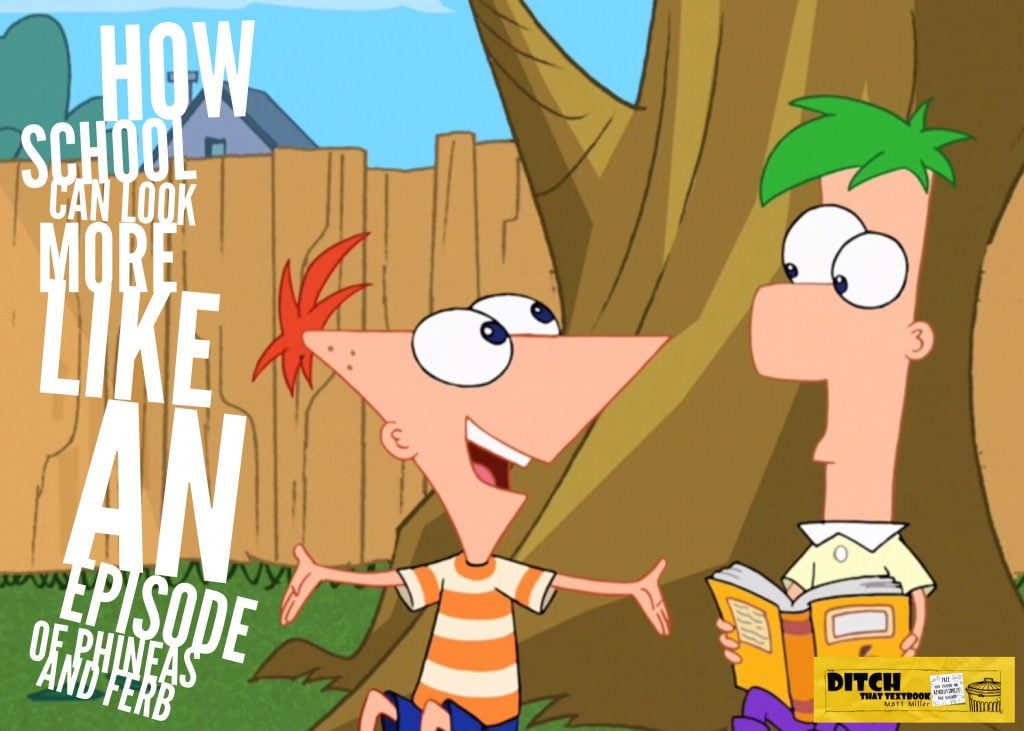 Phineas and Ferb are always in search of adventure, creating and imagining. Schools should look a lot like that on their best days. (Disney Television Animation)

It started with Mickey Mouse Clubhouse many years ago and has since evolved to Good Luck Charlie. (I’ll actually get the theme song for that one stuck in my head and sing it all day. Not by choice.)

I’ll tolerate most of the shows, but there’s one that I’ve come close to turning on by myself several times.

They’re these two likeable elementary-school-aged boys trying to kill time and have a blast during their summer vacation. They often recruit the help of neighborhood friends while trying not to get busted by their sister, Candace.

The show is brilliant. It’s clever. The writers have an enormous imagination, and you never know what’s coming next. They have great celebrity cameo appearances and guest stars. Plus, it appeals to kids and equally entertains adults superbly. (The mark of a fantastic animated show, if you ask me.)

I can’t help but watch the show and think, “This is the way I’d love school to be on its best days.” There’s a lot we can learn from watching Phineas and Ferb. (And if that’s the case, it gives me even more reason to watch more episodes!)

So, to kick this off, let’s take the beginning of their theme song …

And put an educational spin on it (humor me, please) …

Here are some ways I’d like to see school be more like an episode of Phineas and Ferb:

“Hey Phineas, whatcha doin?” — This is how Isabella, the girl next door with a crush on Phineas, greets him early in most episodes. The reason? Phineas is up to something (and it’s not trouble). What he’s doing is sparking her curiosity, and she wants to know more. As a student, if you wanted me to fall in love with learning, more “whatcha doin?” moments would do it.

Inspiration: “Ferb, I know what we’re going to do today!” — This is another typical Phineas and Ferb line. As the boys lounge around, eventually Phineas is struck with inspiration from something interesting in a conversation. That triggers his famous line, and the boys take off creating or exploring their inspiration. Organic exploration triggered by inspiration has led to some of my own favorite and deepest learning — as a student and as an adult.

The hero’s journey: Perry vs. Dr. Doofenshmirtz — Perry the Platypus, the boys’ pet, has a constant-yet-secret rivalry with his arch nemesis, Dr. Heinz Doofenshmirtz, who is always trying to take over and dominate the Tri-State Area with sinister plots. In practically every show, the two meet, Perry has a setback that puts him at a disadvantage, and he must fight through it for a happy ending. It’s a plot line that has fueled stories for ages. If used in the classroom, it can turn your dry content into an epic journey.

Costumes, and lots of them — Perry is always wearing his Indiana Jones-style hat. Phineas and Ferb, along with their friends, always seem to dress in costumes or situation-appropriate garb wherever they go or in whatever they do. It adds visual appeal and makes the atmosphere more festive. A little costuming in the classroom can go a long way.

Don’t have it? Make it! — A rollercoaster. Robots. A time machine. If Phineas and Ferb don’t have it, they make it. And if they don’t know how to make it, they figure it out. (By the end of the series, those boys would have to be unbelievably marketable to many potential employers with their vast array of skills.) There’s a lot to be learned from creating with one’s hands.

Great themes — A theme can change the feel of an entire episode of Phineas and Ferb. When Disney acquired the Star Wars brand, the Phineas and Ferb writers immediately started planning an integration, as they also did with Marvel comics. Creating a clever theme for class for a day, a week or an entire unit can put a new, intriguing spin on everything.

Lots of custom music — Each episode of Phineas and Ferb features at least one song that the writers create just for that show. The songs are catchy. They get stuck in your head. (Like the “Backyard Beach” one. OK, now the Good Luck Charlie theme song is finally out of my head.) As teachers, we’re trying to get stuff stuck in our students’ heads. If we created some custom songs (or let our students create them), it just might work!

[reminder]What are other ways that school could be more like an episode of Phineas and Ferb? [/reminder]

10 ways to start the school year with a bang

6 steps to transition to digital