3D printing, drones, virtual reality and augmented reality have slowly crept into classrooms all over with connections to lots of different curricular areas and grade levels.

It’s been an exciting year of announcements for Ditch That Textbook, including:

In 2016, I was fortunate to present at 60 schools, school districts and events in 19 different states. Nineteen were in my home state of Indiana. Second place was Texas with six! (In fact, I’ll be heading back to Texas pretty soon in 2017 to the TCEA Conference in February — my first one!)

I can’t wait for 2017 … more blog posts, a book, a podcast and my first international presentation: at the TeachTechPlay Conference in Melbourne, Australia, in April! 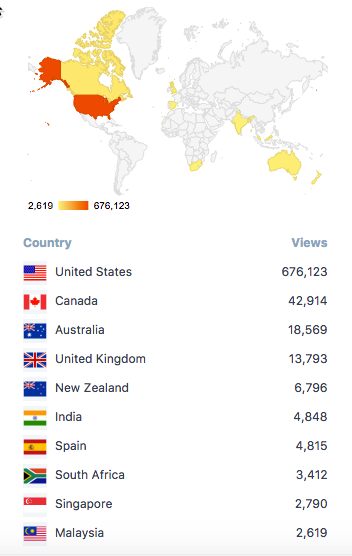 The United States was tops again for readers in 2016, with Canada, Australia and the United Kingdom following up. This was the same last year, too. Since 2015, the top 10 countries stayed the same except Norway dropped out of the top 10 to make way for Malaysia!

Now, drumroll please … the most popular posts of 2016 from Ditch That Textbook:

10. 10 engaging Google Drawings activities for classes — As you’ll see below, posts to this blog about Google tools are always popular … eight of the top 10 posts have the word “Google” in them. Google Drawings is such a versatile tool. It’s like a digital poster board. Here are ways to use it in class.

9. 20 collaborative Google Apps activities for schools — I wrote this post more than two years ago, but the ideas in it are still relevant to classes that use Google Apps. If you want students to work together within the Google universe, these activities can help.

8. The NEW Google Forms: 9 classroom uses — Google revamped its Google Forms, the survey app, in 2016. It unlocked some new features and a beautiful new design. Google Forms is a powerful tool for gathering data and keeping track of things. Here are ways to use Google Forms in your classroom.

7. Game show classroom: Comparing Kahoot!, Quizizz, Quizlet Live and Quizalize — There are lots of these fun formative assessment tools that can make class feel like a game show. In this post, we look at four of them and compare them — similarities and differences.

6. The Magic Automatic Lesson Planner with Google Forms — I just mentioned how powerful Google Forms can be. Here’s an example. You can use Google Forms to write lesson plans — list activities, track standards, whatever. Then, using the Autocrat add-on, Google will turn your answers to the form/survey into nicely-designed documents. You get step-by-step instructions in this post!

5. The Google Classroom Quick-Start Guide + tips and tricks! — Google Classroom is still a powerful tool that teachers want more and more details about. This post gives you the basics if you’re just getting started.

4. 8 interactive Google Slides activities for classroom excitement — Google Slides may be my favorite of all of the Google apps in G Suite. Students can collaborate in it. They can create some pretty cool products. It allows for all sorts of creativity. Here are eight “outside of the box” ideas with Google Slides.

2. 10 Google Slides activities to add awesome to classes — See No. 4 above. It was written this year … this one (No. 2) was written in last year. All of the ideas are still current though!

[reminder]What topics would you like to see covered in blog posts in 2017?[/reminder]