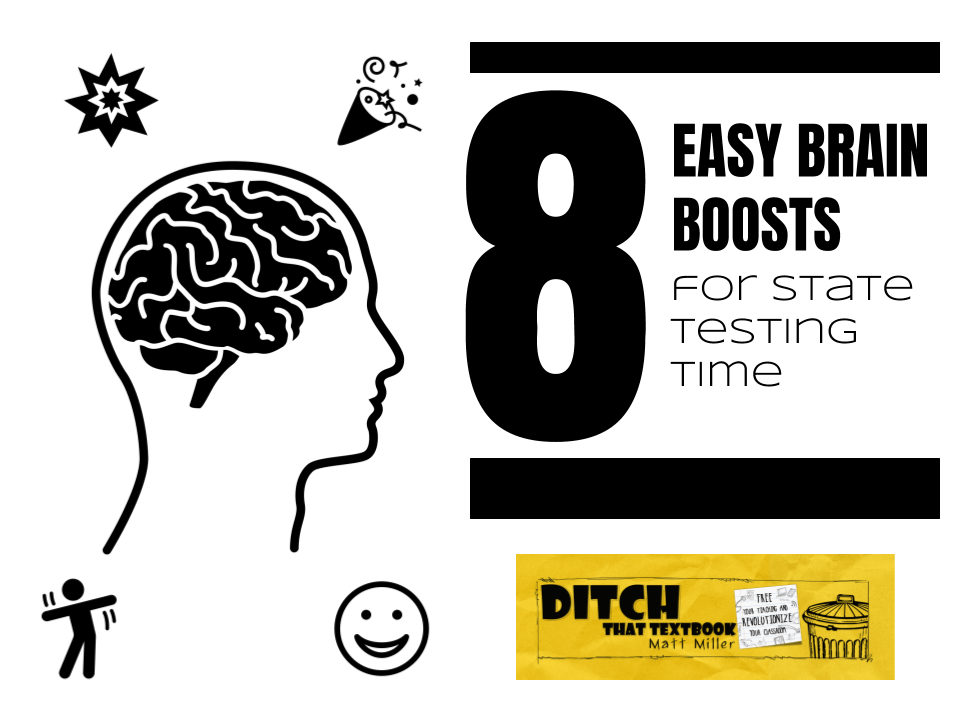 Small changes to test prep — and the day of the big test — can reap huge rewards. Learn about these brain-friendly strategies that work.

State testing is an expected part of life in many states across the U.S. (and in lots of countries). At the end of the year, as mandated by law, students endure hours of testing to measure their progress. There’s a lot on the line — for teachers, for students, and for school districts.

Much of students’ success comes from how and what they’ve learned throughout the year.

The day of the test determines a lot of it, too.

Are students in the right frame of mind? Have they called important ideas out of their long-term memory? Their meals, the conversations they have before the test — lots of things! — can have an impact on their success.

A few simple steps can put them on track for success.

Cognitive science — the study of thought, learning and mental organization — tells us a lot about getting students primed to succeed on tests.

Here are some practices that can help as you approach tests — and even on the day of the test.

1. Use retrieval to lock learning in long-term.

Retrieval practice is the act of calling information from your long-term memory. Sadly, many times, we ask students to do the opposite — re-read notes or chapters — when they study. And sadly, students don’t get the greatest benefits possible.

Simply asking students to recall what they remember about a topic can have powerful benefits for long-term memory.

Or, as cognitive scientists and former K-12 teacher Pooja Agarwal suggests, change your questioning technique. Instead of asking a specific question, be more general and ask, “What do you remember about …?”

Resource: RetrievalPractice.org has a collection of strategies to help students use this powerful brain-friendly technique.

2. Mix up question types with interleaving.

In a baseball game, a batter might see a variety of pitches in an at-bat: fastballs, slow changeups and looping curveballs. The pitcher certainly won’t say, “I’m going to throw three fastballs, then three changeups and three curveballs.” They’re all mixed together.

In that way, learning should look more like a baseball at-bat: lots of mixed practice.

It’s a strategy called interleaving. Switching between ideas during a study session, they say, can lead to better long-term memory. And when you go back over ideas again, use a different order to strengthen your understanding.

3. Instead of cramming, space out practice.

Many of us learned this lesson the hard way in college or university! A long, hard study session before a test is better than nothing. It certainly isn’t a great way to produce long-term memory, though.

Instead of one or two big review sessions, divide them up over time. “Five hours spread out over two weeks is better than the same five hours all at once,” write the Learning Scientists.

Also, they suggest a different version of spacing: don’t study for a subject right after class. Study something else, or wait a little before studying.

Resource: The Learning Scientists have similar resources for spaced practice as above!

On the day of high-stakes tests, life can be stressful for everyone. We’re out of our normal routine. There’s a new set of directions than usual. Tensions can be high, and that can lead to negative emotions.

Our impulse might be this: “That’s the way it’s got to be. We just need to suck it up and go on.”

While that may be true at some point, we can do better — and, in turn, help students do better.

“We become more successful when we are happier and more positive,” writes Shawn Achor in The Happiness Advantage.

That’s not just sunshine and rainbows. That’s science. Doctors in a positive mood are three times smarter and more creative in their diagnoses than those in a neutral mood, Achor writes. Optimistic salespeople outsell pessimistic salespeople by 56 percent.

Think that can have an effect on student test performance?

Find ways to build happiness into the day, and your students will likely benefit.

Resource: Achor shares his findings in this popular TED Talk with more than 2 million views.

Many of us are third birds, but some are larks and some are owls.

“Huh?” you might be thinking. Author Dan Pink uses these birds as a way to describe our optimal times for work in his book, When: The Hidden Pattern of Everyday Life:

Young children, Pink writes, are often larks. Want to get peak performance from them? Let them perform (or take tests) first thing in the morning.

Teenagers and college students, he writes, are often owls. They’re barely awake first thing in the morning, and it’s not because they’re lazy. It’s science. If possible, give them until after lunch to get their brains at full capacity.

Resource: Watch this 7-minute speech by Pink outlining his findings from the book, When.

If it’s not cloudy — and the weather cooperates — a dose of sunshine can produce a useful jolt of energy, Pink writes. The sunlight produces a wide range of light wavelengths that trigger your brain to stop producing sleep hormones and start producing alertness hormones.

“If you feel sluggish in the morning, get as much sunlight as you can,” he writes.

Students in Denmark were given a 20- to 30-minute break before they took their national standardized exams. Students got to eat, play and chat, Pink writes in When.

Nope. They increased. The way Pink describes the difference floored me:

Taking a test in the afternoon without a break produces scores that are equivalent to spending less time in school each year and having parents with lower incomes and less education.

But taking the same test after a 20- to 30-minute break leads to scores that are equivalent to students spending three additional weeks in the classroom and having somewhat wealthier and better-educated parents.

And the benefits were the greatest for the lowest-performing students.

Giving breaks really is essential. In the course of a half hour, you can give students the brain power that’s equivalent to three extra weeks of class time. Talk about return on investment.

Sitting, Pink writes, is the new smoking. It can be harmful to our physical condition. But it can also harm our brain function.

Simply standing up and walking around for five minutes every hour can have great brain benefits, he writes. They can be even more effective than a 30-minute walking break. They can also increase motivation and concentration and enhance creativity.

10 steps to create a student-driven classroom

20 ways to use Formative for awesome assessment

10 ideas for digital exit tickets (and some analog ones, too)