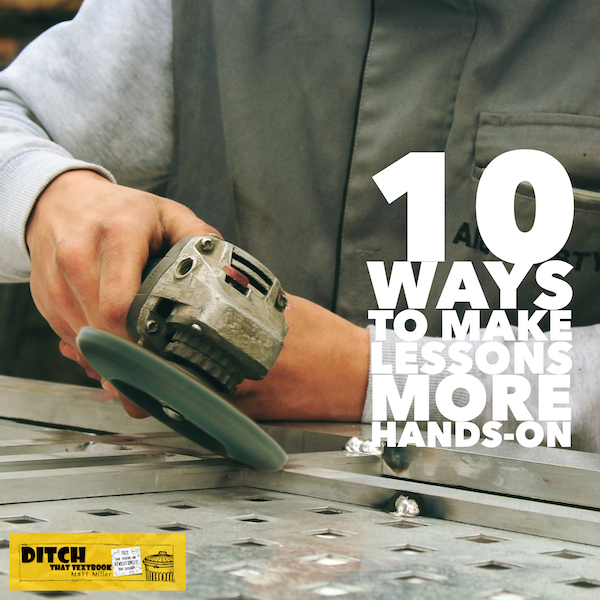 Many of us want to learn by doing. Our students do, too! Here are some ideas for making learning more hands-on. (Public domain image via Pixabay.com)

I’ve seen it in my own life. I bought an old zero-turn radius lawn mower and learned how to drive it on the fly. I’ve tinkered with broken items around the house until I fixed them.

I’ve seen it in the classroom. Students finally getting verb conjugation in Spanish after rearranging cards with word parts on them.

So many of us are tactile learners. We don’t want to be told how it’s done. We want to do it. It’s like that for adults and for kids.

But in so many classes, teachers feel that a lecture, a set of instructions or a thorough explanation is in order first. In many cases, that spoils the fun. It’s kind of like telling what’s going to happen in a movie and then watching it!

This was the topic of a recent #DitchBook Twitter chat (Thursdays, 30 minutes, 10 p.m. Eastern / 9 p.m. Central / 8 p.m. Mountain / 7 p.m. Pacific). We’ve been working our way through the DITCH model for engaging lessons:

It was time for H — hands-on. I asked participants to share a lesson that let students learn in a very hands-on way, and they didn’t disappoint! Here’s a link to a transcript of the chat so you can see the whole conversation.

Here are 10 hands-on ideas from the classroom and what I learned about hands-on learning from them:

1. Get your hands dirty — literally! A mess is memorable. Think of times when you’ve spilled something or stumbled upon a catastrophe by your kids in your home. It sticks in our brain because it’s unexpected. Harness that power and let kids get messy!

A3: Frog dissection in 7th grade! Ss at my middle school get frogs in 7th gr and then cow eyes in 8th. Very hands-on & engaging! #ditchbook https://t.co/9CT3znEjuC

2. Make real-life connections. The answer to “How will I use this in real life?” always makes content more relevant. I love Sheldon’s idea below because it helps kids and parents work together in learning in the context of something everyone does — grocery shopping! Be sure to check out his blog post on this idea (see embedded tweet below) and the #MakeItReal hashtag for more ideas.

@techcoachjuarez My standing extra credit when I taught elem #math was to encourage Ss to grocery shop with their parents #ditchbook https://t.co/2nVEw9BgiR

3. Give students opportunities to become designers. The maker movement and design thinking are hot topics in education right now. And for good reason! Designing, creating, changing, iterating, improving — they’re all good for the brain.

A3 My students design board games to teach 5th graders about a human body system #WMSGameMakers #ditchbook pic.twitter.com/ptWGwMbeLO

4. Bring math to life. Real-life math isn’t as clean and simple as worksheets often suggest it is. Data is messy and often doesn’t make sense. Bringing physics, geometry and other math concepts to life helps kids deal with that reality. (See the final product of the watermelon catapult lesson here.)

5. Let students lead. You really have to know your stuff to teach. (We know that as well as anyone as educators!) That goes for students, too. Adam’s example below is great: “train students to train classmates.”

A3: My student leader lesson model where I train Ss to train classmates on a tech tool or techie project. #ditchbook

6. Try a problem with no clear solution. We don’t have to have all the answers as teachers. We don’t even have to know the answer to what we’re working on! Tisha’s lesson includes cooking without a recipe — a recipe for failure but certain learning.

7. Invent ways to bring textbook concepts to life. New ideas make some sense in the book. Pretty flow charts can help. But when you see it in real life, it clicks.

A3: To teach the assembly line, I had sts get up and create a PB&J each taking a small role in creating the sandwich. #ditchbook

8. Explore and discover. Discovery is powerful. Students find things on their own and make sense of them. That’s what I love about Jill’s activity — students start with a sandbox and end with new learning. (Jill has a great, very thorough blog post below about it.)

A3: Had my Ss dig up artifacts from various eras in American History and identify the “theme.” https://t.co/hgASdq7McM #DitchBook pic.twitter.com/GLAuF3aAnE

9. Use video. It’s projected that more than 80 percent of consumer Internet traffic by 2020 will be video, according to a Cisco forecast. It’s easier than ever to make video — and to make it compelling. Sounds like a great opportunity for hands-on learning.

Use Megan’s idea below, or check out these blog posts about using video in the classroom:

A3: Ss created stop-motion videos to demonstrate the process of mitosis. Had to physically create each step, learned way more #ditchbook

10. Fail until you get it. It’s OK to fail — even though our schools seem to be built around the idea that we should avoid it. We can help students to fail forward and learn when things don’t go as planned. The leaks in Lanny’s lesson show that!

@jmattmiller Totally my Ss are trying to make a game with water going thru a tube. First try resulted in leaks all over but powerful learning #ditchbook pic.twitter.com/U8yeciex2E

[reminder]What lessons have you taught that let students learn in a hands-on way? Why is this such a powerful way to learn?[/reminder]